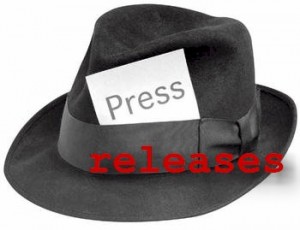 Almost everyone who’s involved in Internet Marketing and specifically SEO knows that Press Releases can be an effective marketing method which at the very least, can provide links back to their site.

As a result, they’ll write an informative article disguised as a sales pitch, and will then submit it to as many newswire services as possible. They’ll either do it themselves or hire someone to do so.

But according to the experts within the media publication industry, by submitting these “announcements” in the manner which they are, doing so may not be as effective as they’re thought to be.

Instead, what the true intent of a press release should be is to attract attention from the mainstream media, and more specifically the journalists who writes for them.

A well written Press Release should be able to influence a reporter to interpret or curate the press release into their own words, by they writing a full fledged article which is then published by a major media outlet.

Once the article is rewritten and then published, that’s the valuable authoritative link which you’re looking for.

The Nature Of Press Releases
So the idea is to get the attention of a journalist who’s interested enough to rewrite the content of your press release, while engaging them to the point where they’re willing to get it published in their usually high profile publication.

What you then need to know is the proper format and verbiage of what a press release should be. What may be more important is producing timely content which is relevant and has the proper spin. Try taking the angle of being a bit critical which should garner some interest and hopefully get you those all important links which these press coverages are able to provide.

Listed are a few tips by the industry professionals on how your Press Release should be presented.

Don’t Bother With A Hard Sales Copy
We all know that people absolutely detest being sold something, but they love to buy, so this becomes extremely important when it comes to the content of your press release.

Press Releases which are written and come across as a sales pitch with an obvious and strong call to action, will most often end up in the delete file by these reporters.

The majority of publications as well as journalists will usually walk a tight rope when it comes to ethical reporting, and the most reputable of them, their credo is to go beyond the pitch.

So if you happen to include a heavy sales message in your copy, doing so makes it extremely difficult for them to strip away the obvious promotions, and get down to the core of the story, if there is a story at all.

Avoid All Industry Jargon
Never use industry jargon or insider slang when describing your product or service, which means absolutely nothing to the average reader. Instead, state everything in as generic terms as possible why your particular company or product is “hot,” and should be written about.

The average reader who happens to read the publication usually doesn’t know the difference between what page views or what Google PageRank is, and they don’t care. So make sure that you precisely explain the concept rather than using a term which is confusing.

The only instance you can use specific industry language is for industry publications, but make sure that you avoid proprietary slang which is strictly used by your company or sector.

Turn Off The “BS” Meter
The majority of journalists are trained to be as critical as possible when investigating a story. So never attempt to write hype which isn’t true because they’ll quickly sniff you out.

Using extremely high praise or superlatives will alert their BS meter, and will then quickly toss your press release into the trash. So make sure that you write them to the point, unbiased, and completely factual.

It’s no secret that the majority of journalists will skim through news releases just to find out what’s trendy, new, and being promoted, and will decide whether it’s worth a story. It’s part of their job, so they don’t want to be entertained.

Specific Styles For Your Press Release
There are two approaches when it comes to writing your press release. The first being the traditional, “reverse triangle” which gives a summary of all the facts, allowing the reporter to craft a story. This type of press release primer allows for a good background on the details.

Another method is drafting the press release as the final end news story itself, which saves the journalist the work of setting up the scene of the story.

Begin with an anecdote or a description at the top, and then get to the point as soon as possible. For those who don’t have a story telling background could potentially create a mess if they attempt to get too fancy.

The majority of the newswire services treats the traditional press release as if it’s interesting, the ethics of journalists however will prompt them to research it.

If you know or have built up a relationship with a few reporters who are open to this type of press release, then the feature style press release could help in propelling you to be written about.

Know Who Your Audience Is
The language of your press release should be targeting a specific audience, so you want to keep your end reader in mind. Your target audience should also ultimately be the journalists, so you should be appealing directly to their interests and viewpoints.

In order to get these journalists to cover your story, provide them with a factual as well as an engaging summary of your press release announcement. Try avoiding technical language or jargon, sales hype, and there should never be a “Call to action.”