The Real Reasons Why Partners Will Tell Lies To Each Other 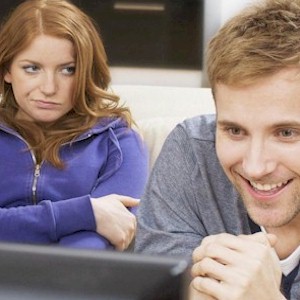 There are just a few relationships which are grounded and based on complete honesty. There are some who will adhere to a strict open truth policy with each other, while the majority will live in a house of little white lies.

Nobody really deserves to be lied to, but there’s a general consensus that we as humans, especially new couples, are likely to tell little “fibs” more often than not. So if your relationship is new or are constantly having trust issues, this may be the result of the suspicion that your partner may be lying to you.

A solid trust policy is something which should be agreed upon from the beginning of the relationship, but rarely used. It’s common for anyone at any given time to tell lies, usually with good intention on making others feel better, to keep the peace, or to protect them. “No honey, those pants don’t make you look…”

So listed are some of the most popular lies, intentional or not, that people will tell. Eventually, most likely sooner than later, you’ll hear various degrees of these lies, so it’s important to know what their true intent is.

My What Lies Are Told
• You’re Absolutely Perfect – “I like you just the way you are, so don’t you dare change a thing.” Let’s get serious, no one is perfect. At the beginning of a relationship, this will be said just because of unfamiliarity, but after a while, definitely something which irks will invariably be brought up, and asked to be changed.

• Yes You Are Right – Every time that you argue, eventually, the argument will end up with one partner saying “You’re right.” This may make you feel better, but realize it’s more than likely not entirely true.

It’s often said to end the disagreement at that moment, even if they don’t consider you to be right. This in the hopes that you’ll eventually see it their way, and they may even be waiting for an apology.

• No There’s Nothing Wrong – What’s commonly said is, “I’m fine,” when asked if there’s anything wrong. You see that they’re upset, they don’t want to talk to you, so you ask again what the problem is. The problem is that they won’t tell you and somehow expect you to know, to figure out what’s wrong on your own.

• It’s Okay Go Spend Time With Your Friends – At the beginning, during the exploration stages, this is fine, but beyond that, not so much. Even if you spend time with your childhood friends, they want you to spend more time with them instead.

If they haven’t told you already, they’ll begin asking you to keep the visits with these friends at a minimum, while pretending that he/she really likes them.

• No Your Bank Balance Doesn’t Matter – Nor does your job. Which you most likely don’t believe anyways as it’s not true in most cases. Most people, especially women will want a guy who’s financially stable and independent, this because they could pick any boy that woos them, and can then pick the best of the litter.

They look for a guy who can assure them a secure future with no foreseeable financial problems. This doesn’t mean that you need to be loaded, but you need a bit of bank.

• Just Love Your Adorable Family – “I look forward to spending more time with your wonderful family.” Which really means I want to see them as infrequent as possible, such as just during major holidays.

Do you really think that they enjoy spending time with your family where everyone begins to microscope them while staking their every move. Your partner will agree to spend time with them when necessary, but there’s no pleasure in it for them, and are most likely just pretending that they like them.

• Sure It’s Okay To Look At The Opposite Sex – I’m secure enough so you could look at other people or go out clubbing with your friends. Even if they say that it’s okay, and appear to be so, they’re definitely most likely upset that you’re even wanting to go. They just detest the feeling of being second best when it’s a night out with the boys/girls.

So know that if you do decide to go out, they’ll pay you back somehow, so reconsider if you really want to make it a weekly ritual.

• You’re Excellent In The… – If either partner chooses to reveal this topic without asking, then don’t believe all that they say. If they begin to compliment you, then most likely they want you to improve in that department.

If they really care about you, they’ll just tell you exactly what you want to hear, just to make you feel better about yourself. So think about your previous relationships, your experience, and then decide if you really deserve this type of compliment and praise.

• No, Really, I Absolutely Love All Sports – This especially for women who are sitting in front of a TV for hours and watching a sporting event. At times, she’ll agree to watch every Sunday morning, afternoon, and night with you, but it doesn’t mean she likes it.

She’ll initially do so just to prove she’s different from the other girls, and that you both have common interests, which is watching sports. Right. You may be thinking, wow, I’ve found the perfect girl.

Rare is a girl when she’ll gladly cook you up some wings and make nachos for you every weekend, and then plunk herself down and watch football all day. So don’t feel that content since it will eventually boil over, and she’ll become increasingly angry every time that it happens.