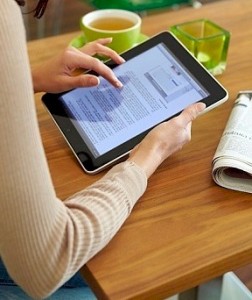 Google and their mobile advertising arm were busy doing their homework by attempting to find out what exactly tablet owners were doing and how they were using their mobile tablet PC units. So they went out and questioned a wide range of the tablet junkies both geographically and demographically, the majority most likely being iPad users since, well, because the Apple iPad currently controls approximately 90% of the market.

A mobile tablet PC computer, or simply just a tablet, is a fully functional mobile computer which is larger than a smartphone or a PDA, and is fully integrated and operated by simply touching the screen. They usually come with an on-board onscreen virtual keyboard rather than a “real” physical keyboard. Almost all of the tablets are Web enabled allowing you to surf the Internet via a Wi-Fi or a 3G/4G wireless connection.

Listed Are The Most Common Myths Regarding Tablet PC Computers
Mobile Tablet PCs Are Only For Those Out On The Road
Since mobile tablets are portable units, so as a result you visualize a group of hip trendy dudes and dudettes sitting at the local coffee shop downtown, actively tapping away on their tablets while connected to Wi-Fi and sipping their latte’s.

But not so fast, the survey results reports that over 80% percent of tablet owners actually use their tablets primarily in the home or at the office. So there is just over 18% percent that actually pack them in their backpacks and use them out on the road.

So perhaps a better name for a mobile tablet should be “Coffee Table Tablet,” since that context seems to fit and makes more sense. You quickly use your handy tablet that’s by your side to check your e-mail while sitting in your living room, right before you begin watching your favorite TV program. Or you catch up on the latest sports highlights or check your stock portfolio while sitting at the kitchen table eating toast and gulping down your coffee during breakfast.

Mobile tablets has the ability of extending traditional desktop computing as well as integrating it into the different areas of our daily lives that the bulkier desktop computers can never do.

The Tablets Main Purpose Is Multimedia
There are some that just refer to iPads and other tablets simply as “media tablets,” most likely because of their instant Web browsing ability and limited capacity space. But going back to the survey, it indicates that just over 48% percent of those who purchased tablets actually use them strictly for entertainment consumption purposes such as listening to music or watching videos.

So because tablets are used mostly in the home, it doesn’t obviously make any sense watching a movie or a TV show on the smaller tablet screens, when there is a large LCD TV sitting in the living room. So more than likely, the 48% percent who indicated they use their tablets strictly for multimedia, are those who watch YouTube videos or read the news or sports reports off the Internet, rather than watching full-length feature films on the device.

Tablets Are Used Strictly To Browse The Web
This may actually be true, as the iPads primary function was originally for Web browsing. But the type of Internet browsing that’s performed on a tablet is a little different from that of a laptop or desktop PC. Over 75% percent of the respondents indicated that they use their mobile tablets to search for quick information.

This may not be that hard to understand as tablets are commonly used when there is a need for performing a quick search for some info. So your sitting there again, sipping your tea in your living room, then you grab your mobile tablet and do a quick search for a “What Is Question” that’s asked while you’re watching Jeopardy, or you quickly check in and read your Facebook messages.

Also, there were over 60% percent who considered their tablet PC as a replacement for the daily newspaper, as they use their tablets to read the latest news headlines online.

Playing Games Are Useless On A Tablet PC

Tablet owners do not actually agree that playing games “suck” while on their mobile devices. Actually, over 80% percent of the responders surveyed indicated that they use their tablets to play online games. This is an amazing stat since the majority of who were surveyed most likely owned iPads, which doesn’t have a Flash plug-in which is necessary for most games to function. So obviously they were playing games which are available from Apple’s App store. This also may mean that the majority of the tablet owners were most likely playing games such as “Angry Birds,” as it’s currently the Apple App Store’s top selling game.

Tablets Are Replacing The Laptop And Desktop Computer
It’s a pretty well known fact that the PC market and particularly the desktop computer has been in decline for a while now. It also makes sense that one of the contributing factors is because of the popularity of mobile tablet PCs. Consumers are now purchasing tablet computers to use for previous PC like tasks. Close to 80% of the respondents indicated that their desktop computer use has decreased once they purchased a tablet PC.

So whether your wanting to believe that the tablet is replacing the PC is up to debate. Most will just suggest that the tablet is actually a PC that’s just in a different format. So it may be a perfectly valid point to say that the mobile tablet is the new personal computer.

Why The Blackberry Playbook By Research In Motion Is Not Perfect