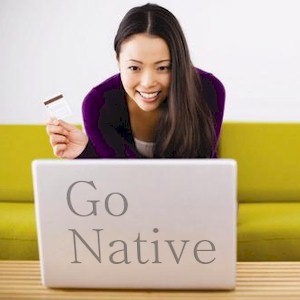 The Internet is all about flow, the more transparent and non-disruptive it is the better, this especially when it comes to advertising. The umbrella term for this is “native advertising,” which everyone at some point has encountered.

What we now live and respond to is a content heavy online world infused with advertising. What native ads are capable of doing is offering advertisers a wide range of flexibility.

When done correctly, native ads are viewed as often as the editorial content itself. Native ads are also shared more than a traditional banner ad, which increases the chances of it going viral or converting. Display advertising rarely gets such attention.

Native Advertising Solutions
Yet there remains a certain lack of awareness when it comes to native advertising, as some misunderstand the concept, this although it’s been around for a while, such as its most original format, advertorials.

Well crafted advertorials aren’t meant to trick or sell the reader, but instead to add conformity to the publication, making sure it’s similar in style to the overall theme of the website.

One issue with advertorials to the reader is that they’re often too well presented, so it becomes difficult to know it’s an actual advertisement or not, which raises concerns.

The experience also shouldn’t be intrusive, so the dilemma becomes that although native advertisers want that click, they also don’t want to be deceptive or annoying either. So it becomes a delicate calculated balance.

Some define native advertising as the gap between a brand and their followers on a social media site, but this isn’t the point. What native advertising does is it takes advantage of the content and the platform where the consumers are currently on.

Creating Successful Native Advertising Campaigns
All digital content is becoming seamless and compelling to its readers, as advertisers scramble to find new methods of attracting attention while engaging their audiences.

Native advertising for many is the solution. By integrating relevant content with outstanding editorial experiences, native ads are able to increase the engagement rates of the marketer’s campaigns.

What’s been identified are the fundamentals that the advertisers should be considering when creating their native ads. Begin by analyzing the existing native ads on the Web, and then expose and rebuild them.

Crafting Native Ads
So what’s been developed is a conceptual platform, a model which has been tweaked and refined, that has been validated into a series of working models, this by industry practitioners and thought leaders.

Derived out of this intensive process, what has emerged are a few fundamentals to follow to create a successful native advertising campaign.

1.) Developing Ad Integration
The way on how a native ad is integrated into the content becomes extremely important. It needs to be inserted in the same format as the associated content that’s personalized for the viewer, while being optimized for the device, and related to the context of the page.

Marketers should be searching for publishers who allows them to incorporate ads directly into the body of the content, this rather than on the right side or at the bottom of the pages.

In the various studies which has been conducted, highly visual ads which were seamlessly integrated into the content streams, benefited the most because of the extended time that’s spent on the ad.

2.) Aligning The Objectives
The native ad needs to deliver the most obvious solution that’s relevant to the consumer at that moment. Native advertising is most effective once the objectives of the publisher and the advertiser is met.

For instance, a publisher of a food or diet site may want to inspire their readers to be more creative with their food and eating habits. The best native ad then would be from advertisers who also wants to motivate the readers to find new and creative ways to use their product.

Research when it comes to native ad campaigns found that searches for “brands” will experience close to four times more engagement, this when the ads are integrated directly into an editorial feed, when compared to a standard banner ad display.

3.) Show Ad Transparency
What’s extremely critical when it comes to native advertising is earning and then maintaining the trust of the consumers. The ads should be clearly marked as “sponsored” content.

The goal should be to create native ads that the readers are expecting to see, so they won’t care whether it’s an editorial or a sponsored ad. Showing this transparency increases trust and conversion rates.

Marketers should be seeking out partners who’ll offer them the ideal ad placement on the page, with excellent content and targeting. Once they’re met, then they can construct a “creative” which matches their offer to the consumer.

Native ads needs to match the look and feel of the site, suit the environment, know the the specific audience, while aligning to the devices being used. Clicking the native ad should be the next natural progression.

The findings indicate that for native ads to be effective, this in the age of the empowered and easily annoyed consumers, should be respectful, relevant, actionable, and offer value. To provide a superior experience which hits all the emotional buttons.