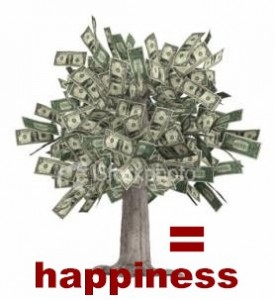 Whenever you think about money, what instantly pops into your head is that tune from The Apprentice, money money money. Then there’s always that question, if you could only choose one of either: money, happiness, or fame, which one would it be.

When it comes to income, those positions with higher salaries, they’re generally considered more stressful, which requires more commitment, responsibility, potential relocation and travel, which takes away personal time and freedom, impedes on one’s health, which can deprive happiness.

There are religions which teach that true happiness is appreciating what you have and are given, and you should serve or help others in need. This rather than attempting to raise one’s personal possessions or status.

But if you have a poll based on this, the majority would choose “show me da money,” and lots of it. That would then definitely make them happier, which raises the question, can money really buy happiness.

Is there a link between the two, does more of the green stuff feed into the happiness. Is there a connection that more money is more happiness.

Surprise… More Money Can Potentially Make People Happier
This according to a study based on individuals in the higher income brackets, which reported that they are generally happier, provided they worked hard to earn it.

But for those experiencing sudden wealth, such as winning a lottery or receiving a big inheritance, most indicated initial happiness, but later weren’t any happier then they were before the wealth.

Having more money obviously reduces the common stresses of life, giving them more options as well as resources. Money will adequately pay for all the essentials, such as medication, therapy, vacations, and certain luxury items.

Also, having more money will cover all of the unexpected cash costing expenses, such as a sudden illness or injury. The worry of basic day to day survival are completely diminished, which can interfere with the individuals ability to enjoy life.

It appears that the threshold level of what’s considered a high income is around $75,000 per year. That’s when the symptoms of being or feeling poor disappears. Once people reached and then go beyond this level of income, all of the basic needs are adequately met, making people happier and less strained.

How You Spend Your Money Makes A Difference
Research suggests that those who spend their money on life experiences, such as taking higher educational programs, vacations, or making donations to help a charity, usually provides for more happiness than those who spend money on possessions, such as that gigantic Plasma TV or Porsche.

The reason for this is because when it comes to the actual “possession,” the happiness is the moment that you buy that item. But once you own it, and it’s sitting in your garage or living room, the expectations are adjusted, and the product is then taken for granted. The thrill and fix is gone baby.

Then they start craving and begin focusing on their next possession that they want, but don’t yet own. Marketers know this and will prey on this feeling. High ticket manufacturers will exploit this by constantly introducing new models of the same product.

Researchers have found that those who receive an unexpected windfall, such as an inheritance or winning a lottery, and either invested and spent the money conservatively, or donated the money to a good cause, were generally happier than those who spend it wildly on themselves.

Being Wealthy Is Relative
What’s important is how much money we have or earn, and comparing that wealth or lack of it, to our direct peers, or friends, who we feel are similar to us. So because of this, the experience of having a certain amount of money, and the feeling of wealth becomes relative.

If a well off person lives in an exclusively gated wealthy neighborhood, they still may feel deprived because of their much wealthier neighbors. They’ll look around and see that they have 10 luxury cars in their garage, and wonder why they can only afford 5 cars.

But on the other hand, if the same individual lived in a poorer neighborhood, they will instantly benefit from the privilege and relative increase in status. They will feel wealthy because they have more than their immediate neighbors.

So one indicator of happiness when it comes to money is that the higher someone’s income is, and if they happen to have more when compared to the other people in the same age group, neighborhood, or peer group, the happier that they are.

Can Money Increase Happiness
So there may be valid proof that if treated properly under the right circumstances, money can indeed buy happiness, but depends on the variables. Money also has a habit of making some individuals completely materialistic and smug, leading them to either miss out or not appreciate the simpler things in life.

The disposable money that’s spent on helping others, or by donating it to a good cause makes people feel better, since it’s money well spent. Money can help our loved one’s afford a better education, get better healthcare, and care for those in need.

The money saved can provide the means to retire earlier while protecting ourselves during times of duress. It’s been well documented that one of the greatest regrets of wealthy individuals, when nearing their death, is not spending more of it when they were younger.

Money Isn’t Everything
Money is required to meet all of the basic needs first, but isn’t the complete tonic for ultimate happiness in life. It just a slice of the pie in our overall lives, the lubricant, when it comes to our satisfaction and happiness.

Other factors includes our relationships, a meaningful occupation, good health, and well being.