Why Always Showing Your Gratitude May Not Be A Good Thing 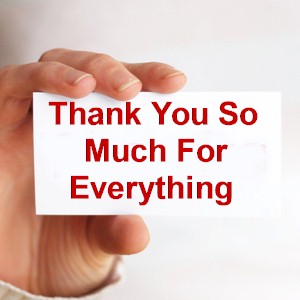 Some will display their gratitude just to feed their ego, for their own self interests. They’ll go out of their way, only when they know that others are watching, extending their goodwill or compassion out to them, to those who may be weaker or less fortunate.

They’ll display their empathetic side proving that they really do care. But when one displays genuine gratitude, what they’re doing is enhancing their own well-being, becoming healthier mentally, while elevating their relationships and status.

When genuine gratitude is displayed, what’s offered is their hand in help, this because they really do care about the welfare of someone else, and not just to feed their own good.

There’s a lot of attention that’s been recently paid towards gratitude, that it should become a personal goal, and not because you want to be noticed, or are wanting to receive a reward such as a ribbon.

What research has discovered, however, is that continuously dishing out gratitude isn’t always a good thing under certain circumstances. Focusing on whatever you currently have instead of what you don’t have, is the general idea, but at times, feeling grateful towards others can potentially backfire.

It’s been found that there’s a series of steps when it comes to accepting gratitude as an attitude.

Don’t Give Out Your Gratitude To Absolutely Everyone
This especially to those who don’t deserve it. If you happen to be in a dysfunctional relationship, which may be emotionally or physically broken, or towards someone that you’re not happy with. Giving your gratitude under these circumstances may not be the right thing to do.

This could be someone close to you, such a romantic partner, close friend, an employer, or any other relationship that’s not completely functional. Instead of showing your appreciation to that person, you should be focusing on finding ways on how you can rid of or repair the unhealthy situation.

Don’t Show Gratitude Just To Return The Favor
Gratitude is an extremely positive emotion which you project and feel once you help someone out, or they somehow helping you out. But when you feel indebtedness towards someone, that’s generally the complete opposite.

This occurs when someone helped you out in the past, and now you feel obligated and think that you owe them a favor back.

If you mistake these two opposite emotions, you may find yourself attempting to repay that favor not to just express your appreciation, but rather to reduce the burden of debt off your mind.

When it comes to someone close to you, such as a domestic partner, this need to repay them can potentially lead towards negative uneasy feelings between you.

Also, when you repay someone back that favor too quickly, it may even be a sign that you’re not interested in that relationship any longer.

Never Show Excessive Gratitude
Once and whenever something good happens to you, you’ll benefit only from thinking as well as thanking those who may of helped make it possible. But what you also need to do is acknowledge the role which you yourself played in the situation.

If you’re someone who immediately focuses on thanking everyone else while completely downplaying your own hard work, achievements, or talents to a fault, what you’re doing is hiding your low self-esteem behind your high praised gratitude.

So never allow your gratitude to get in the way of taking the credit when you deserve it yourself, since it was because of your effort, the part that you played, which led to your success.

Showing Gratitude Always Isn’t The Solution
What gratitude does is it helps in you focusing on what’s important, rather than getting too involved in the annoyances of your everyday living and life. But know that all problems or issues aren’t always annoyances.

Focusing all of your attention towards things which you appreciate may provide you with a certain relief from other serious problems, but this relief however, is only temporary.

When it comes to certain situations, displaying your anger may actually be a better more constructive solution. Under a clinical study, it was proven that couples who expressed controlled bouts of anger, doing so was more beneficial than being completely positive towards each other, this when it came to discussing and resolving their issues.

This was because the anger was able to help them address as well as work out and resolve the situation, rather than being nice about it, and sweeping it under the carpet for another day.

Don’t Give Your Gratitude Out Freely
If you’re keeping score on how much gratitude that you give out to others, thinking that giving more is always better, doing so doesn’t always necessarily apply.

If you also set your standards too high when you give out gratitude, then you may find yourself coming up short, which can leave you feeling less grateful, or less happy, if you haven’t kept track of your gratitude at all.

So if you do hesitate when attempting to put pen to paper, you may as a result begin thinking that your life isn’t that great, or that you don’t have much to be that grateful for, but that may be a good thing.

If this is the case, then review your standards based on focusing more on quality, rather than quantity of giving out gratitude to others.

The Most Effective Ways Of Boosting Your Metabolism Levels

Negotiating The Highest Possible Salary For Your Next Job