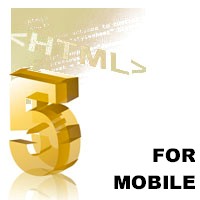 There’s a growing number of developers, marketers and merchants experienced in mobile site development who are absolutely ecstatic about the arrival of HTML5. HTML5 is the newest web programming language on the block that’s proving to having the potential to completely overhauling the face of mobile sites. This is good news since some of the current mobile apps on the market can be extremely finicky at times when compared to the new HTML5 driven mobile sites.

HTML5 enables developers and site owners who has designs of producing mobile websites the ability to be able to create sites which can function similar to the much more expensive, higher maintenance mobile applications.

[ad#co-1]
What the language allows is for the developers to be able to poke and prod into the inner guts and workings of a smartphones operating system, such as Apple’s OS or Android. When it comes to mobile apps, they reside and operate independent from the mobile operating systems.

Smartphone Apps That Behave Badly
The sites which are powered by HTML5 are able to use the smartphone’s built-in GPS technology for instance, while also enabling common app related functions such as double-tap zooming and gestures. Other capabilities include caching data within the mobile browser on the smartphone, which speeds up web page load times.

Mobile Apps vs Mobile Sites
When it comes down to comparing apps vs a HTML5 driven mobile site, side by side, the biggest questions are:
• Do you need both an app and a mobile site for your business
• Would you even bother to invest in both
• Can you afford to have both

These are the usual queries for developers who has recently adopted using HTML5 while still operating several smartphone apps over the various mobile based platforms.

Your web development team is currently required to manage multiple platforms for the various smartphone Operating Systems, tablet PC’s and the web. For instance, there’s one specific app for the iPhone, one for the Android smartphone, another app for the iPad etc. So you may be wondering how you can support all of them with the current resources which you have at your disposal.

There are now just too many platforms costing too much time and money to handle and satisfy all of the the various devices out there. Long gone are the days of the single desktop computer platform running Windows. These various OSs has made it extremely complex for the developers to handle.

HTML5 And Its Potential
HTML5 has the potential to be able to completely alter the mobile website landscape. It allows for the ability to mold itself more into mobile app like sites, closely resembling the independent mobile apps themselves.

This is since company’s with a mobile site are just required to manage just one single site using HTML5 instead of attempting to juggle multiple mobile apps for the various mobile platforms, which all need different requirements.

So what this all means is that once these developers decide to use HTML5 for mobile, it gives them the ability to create more powerful, more functional “app” like mobile websites which could potentially eliminate apps altogether.

For this reason, HTML5 is proving to be a godsend for mobile based developers who are currently creating mobile commerce based sites, as it can be a “one-stop” solution.

Apple, who happens to be the current leader in HTML5 development, are continuously adding new features along with new functions particularly on their Safari web browser. The same OS which runs on the iPhone, the iPod and the iPad tablet.

Independent developers who are creating mobile web sites using HTML5 are also focusing on Apple since when using their OS, there’s less “fragmentation” in their platforms.

So what this means is that any HTML5 feature which is developed is virtually guaranteed to instantly render properly across all of Apple’s devices since they all use the exact same OS, the same browser, and Apple manufactures the hardware as well.

Currently with Android Operating Systems, developers are experiencing fragmentation at times. This is because the current Android mobile devices which run on Android’s OS do not share the same hardware and there are tweaks in the software.

The major manufacturers who uses Android, such as Samsung and Motorola, all currently use different hardware technology, such as a different user interfaces and different processing powers.

So what the developers need to account for when creating HTML5 mobile sites are the differences in hardware protocol with all the various Android smartphones. This obviously poses no problems with Apple since they manufacture both the hardware and the software.