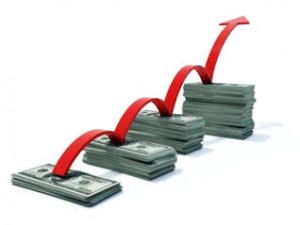 For decades, the conventional and conservative advice was to save more, penny pinch any extra money that you earn and keep it in your socks or under your mattress for a rainy day.

The mindset was that you should stop going out to the deli everyday for lunch or buy those extra pair of shoes, but instead bring a bologna or cheez-whiz sandwich to work.

Historically, it’s been an ideal and a consciously good idea to save a bit each and every month by reducing frivolous expenditures. But lately however, it appears that’s not exactly how you should be approaching things.

If you’re really wanting to begin socking away a lot more coin each month, the best way is is to somehow boost your income rather than not spending as much. Particularly for younger people as there may not be that much expenditures to cut in the first place. However, the fundamental theory is that there’s absolutely no ceiling on how much more money you can earn.

[ad#co-1]
To not misunderstand this concept, say a 30 year old with no means of a steady income happens to be making large payments towards a sports car, rent for an apartment in a pretty posh neighborhood, etc. Obviously, it’s a lot more prudent to move to a lower rental suite and to switch to a domestic four door car instead, settling for the most obvious and low-hanging fruit. Everyone should be brainstorming and creating new methods of earning additional income instead.

So this doesn’t necessarily mean that someone who’s currently working in an office should also be working as a waiter at night. In fact, that’s not the primary principle at all. Instead, you should be thinking of a host of different entrepreneurial ventures which you can activate quickly and inexpensively, such as creating iPhone or Android apps.

Moving From Employee To Self Employed
So rather than looking around for other bosses or new jobs, people, particularly the younger generation who is caught in this economy as it is, should somehow learn how to become their own bosses, even if there’s just a few limited options open to them.

For some, this suggestion may just sound a little too intimidating. But notice that the most recent movement of entrepreneurs are younger people, and most don’t even realize it. Anybody who decides to babysit for a few dollars or cuts lawns around the neighborhood is an entrepreneur.

These kids need to go out and find customers usually through the mommy network or word-of-mouth, but provides a much needed service for which they’ll get paid for. So isn’t that exactly what an entrepreneur does.

When this concept is introduced and thrown out there, most will quickly ask what types of business they should be starting. The easy obvious answer is, “That’s what you need to somehow figure out for yourself.”

Entrepreneurs will just usually look around and then identify a product, need or a service which people currently don’t own and may potentially pay for. The amount needs to be worth it for the entrepreneur to extend the money as well as the effort to provide it.

This is not saying that a person needs to do extreme brainstorming until they find that better “mouse-trap” product, that ground breaking fantastic palm slap on the forehead idea which will eventually make someone extremely rich.

But quite the contrary, it’s always worthwhile by just doing a variety of different types of smaller ventures as long as each project is completely self-contained and won’t absorb that much time or money.

It may initially take a bit of trial and error to be able to gain the skills, as well as the confidence and the knowledge of the various consumer demands before actually finding something that’s profitable.

Creating Additional Sources Of Income
So generating as many multiple sources of income is the key and a wise thing to do. Given this current economic environment, it’s almost approaching mass critical levels.

Even if you currently have a good steady paying job, you can’t be certain that the same position will still be there six months or a year from now. People who are currently inculcating that small weekend hobby/business can then expand that business if an unfortunate event such as a layoff or downsizing occurs.

So that same person, who always had the skills and aptitude to start a web design service, but postpones it until the following year when the unemployment rate happens to shoot up higher to 14%, the competition will then be that much steeper.

It’s a lot easier to get that fledgling business idea started and established now, do it during the evening hours, the weekends or your days off, so that you’ll have established a solid workable system as well as a customer base if the economy happens to turn against you.

So this isn’t about trying to save that extra dollar by looking over your monthly budget and saying, “This is how much money I make, so if I cut a bit back here, and here, then I’ll be able to put aside an extra $200 more every month.”

In this current economy, you should rather rather be saying, “If I’m able to cut back a little here, then I can free up an additional $150 per month. Then if I outsourced all of the computer programing out, after all the expenses and even treating myself to dinner every Friday night, I could then earn an additional $500 per month.”