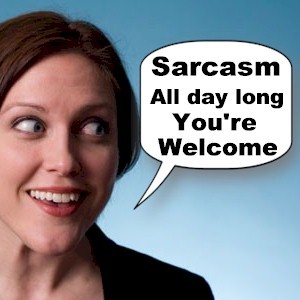 To be sarcastic, sarcasm as a joke form, so they say, is the ability to subtly insult someone without they immediately or never realizing it. In most cases, projecting sarcasm is thought to be a means of indirectly expressing passive aggression toward others, intentionally.

Or it could also be because of the insecurity of oneself, feeling a need to pick on or defame others, this to feel more superior. In some cases, sarcasm acts as a shield, a buffer from all the morons that are encountered. It’s their fault that they can’t handle the truth.

What sarcasm reveals are types of “true lies” which the recipient doesn’t always comprehend as a putdown or insincerity. Sarcasm is a derivative of humor that’s well crafted and thought out, with an underlining message.

It can also be a private joke which can protect, save you from those who are annoying, or saving you from aggravating situations, this by providing a respite in the humor, even in the worst of situations.

Is Sarcasm A Nose Above
At times, those who are sarcastic are often branded as being certified smart asses, jerks, or are they just more intelligent than others, this at least emotionally, than those who don’t use sarcasm.

There are actual studies which shows how certain individuals understand sarcasm, this depending on a carefully laid out, well orchestrated sequence of cognitive skills that are considered complex in nature.

This applies to the specific areas of the brain which are activated to comprehend a certain situation, and then immediately coming up with a witty response that is opposing.

A Study Of Sarcasm
There are experts who study the funny, who actually research the art of sarcasm. They claim that sarcasm is related to our ability to understand what the immediate current mental state of a person that’s targeted is, both linguistically and cognitively.

The research revealed that there are certain areas of the brain which can decipher irony and sarcasm, process language, recognize emotions, while understanding certain social cues.

This ability, to be able to instantly understand the exact state of mind of others, and their emotions, is related to the ability to understand and then deliver the sarcasm precisely.

Sarcasm Taxes The Mind
What sarcasm does is it has the ability to exercise the brain, this more than just sincere statements or other forms of humor, which are easier and more obvious to understand.

Experts have actually monitored the electrical activity of the brain, for those who were exposed to sarcastic remarks, found that it needs to work harder, this to understand the nature of the irony.

What’s found is that there’s a three-pronged neural process that takes place, certain pathways in the brain which allows us to understand satire, to detect and decipher these humor insults.

To Understand Sarcasm
• Initially, what the language center of the brain’s left hemisphere does, is it interprets the exact literal meaning of the words spoken

• Then the frontal lobes and the right hemisphere of the brain processes the speaker’s intention, filtering out contradictions, its literal meaning, placing them into their proper emotional and social context

• Finally, the right prefrontal cortex takes charge, this known as the “sarcasm meter,” which makes a judgement that’s based on our emotional and social knowledge of the situation at hand

A Test Of Sarcasm
Another study based on the detection of sarcasm, involved college students who were forced to listen to complaints on a customer service line of a large company.

It was found that the students were better able to comprehend and solve problems more creatively, this when the complaints were more sarcastic in nature, this rather than the plain angry complaints.

As a result, what sarcasm does is it appears to stimulate more complex thinking, while attenuating the negative effects of anger.

The students who had the ability to recognize sarcasm, are thought to of had a better developed “theory of mind,” which is the ability to vision beyond the actual literal meaning of the words, understanding that the speaker may of been referring to something that’s entirely different.

For instance, what theory of mind does is it allows one to realize that once you hear your date say, “nice pants,” this when you know that the pants are hideous, you realize that they meant the exact opposite. Jerk.

This Is Your Brain On Sarcasm
For sarcasm to be understood, what it requires is the brain to go through a series of “mental gymnastics.” Statements which are ironic, satirical, or sarcastic in nature, forces the brain to think beyond what’s actually being said.

To go past the literal meaning of the spoken words, understanding that the speaker may be expressing something that’s abstract. What exposure to repeated sarcasm does is it improves the creative problem solving process.

Over time, this increase in cognitive action isn’t wasted. Actively comprehending sarcasm is considered an excellent form of mental exercise, this similar to physically training our muscles.

If you do 40 pushups a day, over time, your arms and shoulders will get toned and muscular. Since sarcasm is a form of mental gymnastics, it can only strengthen the mind. So over time, the extra repetition of sarcasm is bound to tone up the brain.

To Be Sarcastic
Some claim that sarcasm is used as a form of gently insulting someone, a way of sneaking in direct criticism by using humor. Others think that the smug and mocking nature of sarcasm, can be more painful than just the regular directed putdown.

What it comes down to is that it all depends on who you’re targeting the sarcasm towards, as there’s no other method to shield ourselves from those who are moronic.