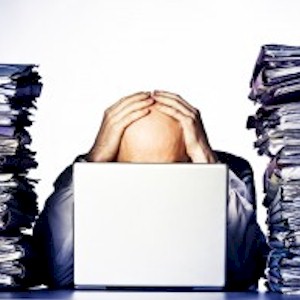 Go back to the last time that you were required to make a major decision in your life. The one which required you to do diligent research, which compelled you to adsorb as much information as possible to make the best possible informed decision.

Doing so lead you to spend countless hours analyzing every piece of data that you could possibly get your hands on.

You most likely became overwhelmed and even slightly confused with all the info.

The belief being that the more information that we gather and feed into our brains, and the better informed we become, the result should be that we’re able to make a better more logical decision.

This is the reason why we subscribe to the numerous email newsletters, follow twitter accounts who are in the know, use Google Alerts, and read what our friends are saying about a particular product, issue, or item on Facebook.

Is More Knowledge Really Better
They tell us that the more knowledge that we accumulate and consume, the more power to us. But is it possible that our thirst to absorb all of this data can actually somehow hold us back.

What if this obsession for information is overloading our brains, and actually reducing the quality of our actual decision making.

This very question was recently raised by social scientists in a study which involved pursuing information into our brains which may be useless, and as a result was misused.

A Study In Information Overload

The experiment itself was pretty basic. The participants were split into two different groups. The first group was asked to read the following:

“Say that you work at a major bank and you approve mortgage loans. The job is primarily to reject or accept mortgage applications which were submitted by recent newly weds, all who has stable well-paying jobs along with solid credit.”

Most of the applicants appear qualified, but during the routine credit check process, it was discovered that one particular applicant, for the past 3 months, failed to pay off a $6,000 debt which they charged on their credit card. So the question becomes; “Do you reject or approve the mortgage application.”

The second group was given the same information with one distinct difference. Instead of knowing what the exact amount was, they were given conflicting reports on what the actual size of the debt was.

They were told that the debt in question was somewhere between $6,000 to $20,000. The participants were then asked to reject or approve the applicant immediately, or they had the option of delaying their decision until they knew what the exact amount of the debt was.

Not surprisingly, the majority of the Group 2 participants decided to chose to wait until they found out the size of the debt.

So here’s the twist in the study. The second group was then told that the actual debt was $6,000. Even though both of the groups ended up with the same exact information, the second group went out of their way to seek it out.

Results Not That Surprising
To say that these results were not surprising may be stating the obvious, even though both groups eventually got the same information. But then the rate of rejecting the application 3X times higher for the first group.

The reason may be pinpointed to a troubling blind spot on how we decide to make decisions in general. It highlights the downside of being bombarded with too much information which is readily available.

So what this might just do is convince you to ditch all of your convenient resources, such as your easily accessible smartphone on your hip, the next time that you’re faced with an important decision to make.

The Allure Of Too Much Available Data
What the research underscored is an obvious message. With all of the availability of instant online information that’s available to us, we can easily become fascinated, sidetracked, and obsessed with knowing every little detail of any unknown information that there may be.

So because of all this data which is readily at our fingertips, such as instantly knowing how high the peak of Mount Fuji is, eliminates any uncertainty in our lives that may be unknown, and has now become completely nonexistent.

If you’re wanting to know what the weather is this Saturday, or next week, you can check your mobile app and instantly find out. You can also find out what the latest scandal is of your favorite movie star by going to TMZ. If you’re wondering what that crush you had in high school is up to, you can then just stalk them on Facebook or LinkedIn.

Since the Internet is now revealed in real time, and not outdated or trivial as in the past, and because any accurate “breaking news” is available on outlets such as Twitter, it has the ability to alter major business or social decisions.

There’s always that new updated report, or yet another financial analysis, or one more review or perspective which is conveniently just a click or a tap away.

Brain Information Overload
When it comes to our brains, all of this current information is completely addictive, as we need and want to know. What this craving of information does is it releases dopamine, which is the thrill or happiness hormone, which also has the same powerful effect as any recreational drug.

This is the reason why we become so vulnerable to the Web, as we become Internet information junkies, along with all the variety of attention parasites which can leave us no worse for wear.

We now live in a world where life or death is just one click away, as it can instantly bring us the promise of the latest discovery. We become victims of risk as well as becoming data addicts, all without the need for outside stimuli.

The challenge then comes from all of this information overload, is differentiating between which of the actual questions are actually worth exploring, and which of the answers should be best left unasked or unanswered.