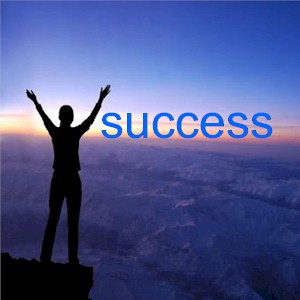 The thinking is that we’re all born successful, so we just need to follow the path, which will lead us to fulfill the potential that we’re meant to realize. Others claim that we become successful because of the choices we make, by directing the exact life that we want.

The most logical is we become successful based on the decisions we make in life, by sliding down our chosen rabbit holes. True, that some are born into more fortunate circumstances than others, but it’s up to the individual to ultimately chase success or not.

Some individuals will just happen to be in the right place at the right time, while others make fatal mistakes. There’s no possible way knowing which direction your life will take. Although you can’t direct everything, you can control certain things.

What most choose is the safe and easy path, thinking it’s the right one or they’re just plain lazy. They stick with the poor paying job that they hate, contorting to a boring life.

There are a set of common excuses which will hold people back, this from pursuing what their true destiny in life can be.

There’s Not Enough Time
The common excuse most people use is they don’t have enough time. It’s convenient and valid since most lead busy lives. That full-time job, family, friends, and hobbies, leaves just a few hours of vacant time a week. So there’s no time to chase dreams.

Everyone has different circumstances but, there’s one constant that no one can escape, this regardless of who they are, and that’s everyone operates on 24 hour a day clock.

So those ultra-successful entrepreneurs with abundant energy, who chases their dreams don’t have more time than you do.

During the 168 hour week, they’ll work for 80 to 100 hours to pursue their dreams. They do so by prioritizing and organizing. So you already working 40’s hour a week, isn’t an excuse.

Not Enough Resources
Another excuse is a lack of resources which is a self-imposed limitation, that’s rooted in the belief that you need plenty of connections and capital to start.

What’s known is that the most successful and wealthy of entrepreneurs, rarely fund their own startups. The funds are usually from investors, peers, or kickstarter.

What this proves is you don’t need millions of dollars in startup money, but instead just willpower. Then once injecting confidence, what you’ll suddenly find are a variety of resources presenting themselves.

Too Many Personal Issues
Such as age, too young or too old, shouldn’t be a limiting factor for business success, but most consider it a big stumbling block. The truth being no one has no idea what the appropriate age for chasing their dreams is.

When in our twenties, we think, “I’m too young. I need more experience under my belt.” Once you hit your forties, fifties, sixties, “I’m too damn old to start something new.”

So the question remains when is the right age to pursue our goals. The answer is this moment, right now. Whether you’re 19 or 67, you can and should be chasing your dreams.

There are certain pro’s and con’s of being young or old, so take advantage of your will. If you’re young, then you have the energy, passion, and the time that can’t be found later in life. Older people have the wisdom and experience they didn’t have when younger.

There’s proof that age isn’t important, as those in their teens are capable of million dollar startups, while those well into their retirement has found success. The key is having the fortitude to take action.

I Don’t Know Enough
Another common self-imposed excuse is not having enough knowledge to succeed, as most will constantly learn new information without taking action.

The core motive of this is rooted in a lack of self confidence. The truth being that no one knows all the answers, so it’s trial and error.

There are countless accounts of individuals acting on their dreams, having the faith to build on what they believe in, and having the confidence that they would “figure” it out once the problems arise.

Most when beginning have no idea what they’re doing other than having the inertia to take action, to get started, to chase their vision. They all admit they didn’t have anything figured out yet when they started.

What’s not needed is every detail known to become successful. Just fill in the gaps, get others to help offset your deficiencies as they arise, while meanwhile, you’re gaining plenty of experience along the way.

A lack of knowledge isn’t an excuse, this because there’s now a myriad of information that can be easily found online, and readily available.

But I Always Fail
The most common scare is the fear of failure, which is also the most persistent. While there are a variety of excuses, it’s the fear of not succeeding that prevents most from chasing their dreams.

What becomes painful is that you’re terrified of pursuing an idea and failing, then watching someone else doing the same process, executing the exact dream and they succeed.

Failure is entirely possible, but that shouldn’t hold you back. Those who are the most successful in life, all have experienced failure numerous times until they finally got it right.

The Removal Of Excuses
Every excuse is a self-imposed limitation. No one else is preventing you from chasing your dreams but you. What you need is to realize that you control whether or not you’re successful.

So decide which excuses are holding you back, isolate them, and start to push them aside, this by taking proactive sustainable forward action. Then before you know it, that elusive thing called “success” might suddenly fall on your lap.