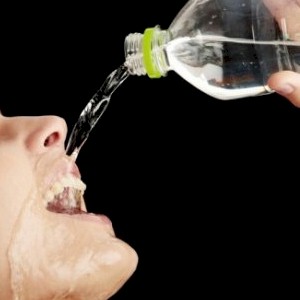 There’s only a few essentials that we need in life to survive another day, in some cases the next minute, which are food, oxygen, and water. These are our basic necessities, and all lifeforms on this planet springs from there.

All of these basic essential resources also eventually begins to get treated as a commodity, and water is no different. We now pay for the quality of the water that we drink. Water as a result has become privatized as it presents a profit opportunity, this for big business and the governments to capitalize on.

Water has now become a pure marketing play. This clear liquid gold which flows out of our taps is now a gigantic branding strategy, as corporations have found a way to corner the water industry and sell water to us, the consumers.

The conditioning is that we now believe that the water that’s available to us in our homes isn’t clean, it’s somewhat contaminated, not pure. So the industry of privatizing water has evolved, this especially in the less developed countries of the world, which also now clearly applies to us as well.

The underdeveloped countries have no other choice but to treat clean water as a rare expensive commodity only available from corporate sources. The need for this commodity is so in demand, that there’s no other solution, and the cycle continues.

But Water Is Everywhere
In the areas where pure drinking water is abundant, available, big business has now found ways on making their water exclusive, to be projected as elite or exotic. This began with the “pure spring” spa liquids from Europe decades ago.

What certain water brands began gaining was cultural meaning, and this significance extended towards all of the exclusive mineral waters being marketed. Massive dollars as a result are being spent on the marketing, packaging, and branding essentially free water.

Their angle is that the value, the quality of these water sources are claimed to be unique, from exotic locations around the world such as the south of France, where the “springs” becomes the branding play.

In yet another marketing strategy, corporations have found another new angle which they have supposedly improved the quality of the boring water, this by developing new and improved vitamin enriched water which are now infused with electrolytes.

This perpetuating the idea that just drinking routine tap or bottled water is no longer good enough, but now what you need to do is drink better more fortified healthier water.

The Water Play
So why is water so expensive. Those who engage with this particular resource reveal that it’s the cost of labor that’s required, along with filling the void, the demand that pure water plays in the consumers lives.

This awareness along with the worldview appears to differ based on the common perspective of individuals, those who can easily get clear drinking water from a tap, to those who lives in the areas where clean water can be purchased or easily accessed.

There are instances, however, where in our mainstream lifestyles, that the need of not having water is felt, most often when it doesn’t become easily accessible to them.

For instance, there are times when the water supply of a local community can get contaminated, and not be available for weeks at a time due to a chemical leak or a natural disaster such as an earthquake. This is when the scarcity of water becomes real and become realized.

So Should Water Be A Commodity
So the question remains if water should be treated as a commodity. It obviously is as all other essential natural resources are trapped as well. Water remains as the quintessential essence of survival of human life.

We know that to sustain life on this planet, this pale blue liquid is essential, and we cannot survive without it. Without water, it won’t take long for every living species to wilt and terminate.

So since it’s allowed for water to be traded, to be treated as a commodity, then what it comes down to is that they’re essentially trading our existence, our livelihood as a commodity.

Water Is One Half Of Life
So water since has now been successfully cornered, the next step, the next evolution which will occur in our lifetime, is that major industry will begin treating oxygen, the purity of the air that we breathe as a commodity as well.

That’s the obvious next target as there’s a lot of money to be made in commodity trading. What may eventually end up is the trading of carbon, the other half of water, the trading of air.

Although the concept may sound ridiculous, traders will most likely figure out a way to trade pure air, hot air in this case, which will be befitting.

The Expense Of Water
But there’s no denying the labor costs that’s involved in the management, distribution, and the handling of bringing pure clean drinking water to us. The costs which are involved to deliver the water along with desalinating it.

Local water utility companies already exist and has been in place for decades, this to bring drinking water to our taps in our homes, and they have the right to charge for it.

Water has always been treated the same as electricity or energy, which includes all the other necessities which it competes with, such as heating oil, liquified natural gas, alternating current, etc.

Since water is treated as a commodity, it’s prices will also rise and fall based on the level of its scarcity or demand, such as during the summer, or if there’s droughts or contamination.

So just pure basic water can eventually begin to pose as a problem for those in our society who are struggling to get by, those who are barely able to make ends meet. This can become a hostage situation as without water, humans and the food source will perish.