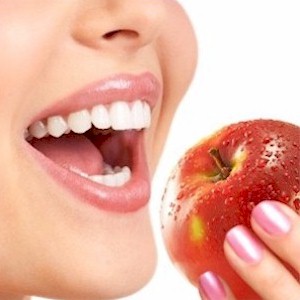 One thing for certain is that we all need to eat food for nourishment, to survive, to exist another day. What we also want is to alter our body image, such as losing that belly fat. The idea is to avoid the latest greatest trendy weight loss plan, by just eating better.

The trouble with food is that we tend to eat the things we like, while attempting to maintain a healthy lifestyle. What we’ll do, this by habit is reach for foods we know are bad for us, which makes us fat. So the solution is finding healthy tasty foods which are also filling.

What’s found available are a certain group of common satiating foods to eat which satisfies your hunger, which are also able to keep the unwanted pounds off.

These particular foods are focused on being tasty, while also being high in protein and fiber, elements of a good diet.

An Apple A Day
Known to keep the doctor away, while also keeping your hunger at bay. The reason being that apples in particular are an excellent rich source of pectin, which slows down the digestive process, making you feel full for longer.

What the various studies confirm is that you should make apples a part of your daily diet, such as sliced in salads or placed on oatmeal. It’s found that it can carry you through the day without craving for more food, which are usuallly unhealthy or convenient.

Eat More Figs
This to satisfy that sweet tooth that everybody has, as bad sugar makes losing weight a difficult task. This for those who constantly munches on foods which contains plenty of refined sugar, such as chocolate bars, candy, store baked goods, and ice cream.

So consider figs which are a natural source of sweetness, that are also loaded with plenty of fiber. Just one fig is all that’s needed to satisfy that craving because of their density. So dice up figs and top on your oatmeal, or bake them into your cookies and muffins.

Eggs Are Filling
What most dietitians claim is that the popular egg is one of nature’s most complete proteins. The reason being that they contain all 9 amino acids, all which the body needs but are not able to naturally produce.

What egg yolks have developed however is a bad reputation for containing too much cholesterol and fat. What’s now known is that not all fats and cholesterol are bad for us. It’s the type of the “bad’s” that should be avoided, none which the egg contains.

What the amino acids that are found in eggs does, is stimulates the release of the body’s natural appetite suppressing hormones, ghrelin and leptin.

It’s All Greek Yogurt To Me
What pure dairy proteins, such as Greek yogurt, does is keeps the blood sugar levels balanced, which as a result reduces hunger pangs and the tendency to overeat.

The key is choosing Greek yogurt as it removes liquid whey, this because it contains two times more protein than conventional yogurt does. What Greek yogurt also contains is less sugar when compared to the regular types.

It was found that Greek yogurt singularly was the best food for losing weight, this based on a study which monitored a large cross section of diet foods over a couple of decades.

Full Of Oatmeal
For those who’ll eat a hearty bowl of oatmeal for breakfast, the odds are good that they won’t get those mid-morning hunger pangs until lunch. Oats are an excellent source of high fiber, which means that it’s able to absorb liquid much like a sponge.

The best source is eating steel cut oats which are mixed with either unsweetened almond milk, low fat milk, or water, which are topped with apple slices, berries, figs, or protein rich nuts.

Oats will keep you full for longer because what they’ll do is slow down the digestive process, while stabilizing insulin which regulates blood sugar spikes.

Wheat Berries
Similar to quinoa, wheat berries are kernels of whole wheat grains, which contains massive stores of natural fiber and protein. On your quest to lose weight, fiber and protein should always be considered as your greatest nutritional allies.

What any food source which contains hearty amounts of both protein and fibrous rich foods, such as wheat berries, does is stimulates the release of ghrelin, which is a vital appetite suppressing hormone, as it signals the brain and the gut that it’s full.

More Beans Please
Beans are excellent for your heart, so always include them in your salads, stews, soups, and sauces, while they’ll also reduce your waistline.

What dietitians will tell you is that it’s beans, which provides one of the highest levels of fiber and resistant starch, while being low in calories.

There are plenty of varieties which offers a range of tastes, such as kidney beans, black beans, navy beans, and lentils. All which can be incorporated into low fat, low calorie dishes, guaranteed to make you full.

It’s the resistant starches which are found in beans which slows down the release of carbs and sugar into the bloodstream, which gives you that feeling of being full.

Popcorn Is Filling
Provided it’s not the salty, butter drenched variety available at the movies. Instead, choose the air popped kernels that you can prepare yourself. Also avoid the toxic microwave popcorn at all costs.

What it does is occupies a lot more space in the stomach, satiating you quicker, which prevents impulsive snacking. For toppings, use natural fat-free spices such as dill, cumin, or chili for taste.

How Prejudice And Discrimination Can Hold Back Your Growth