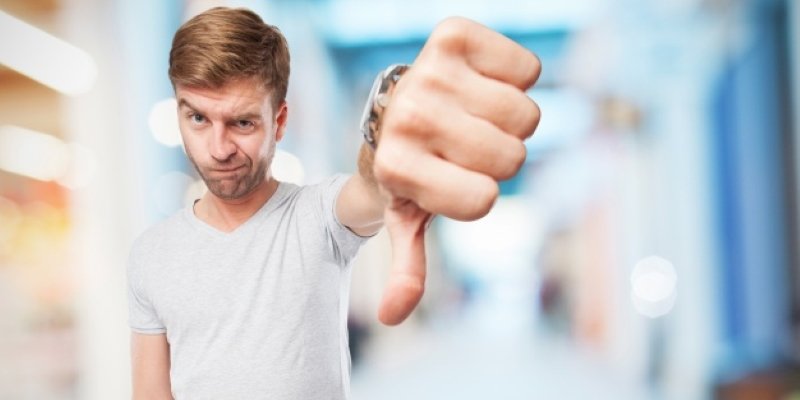 We humans are a sensitive bunch. Our psyche gets bruised easily once rejected. As a result, what the majority of people are afraid of, is to ask for what they want. They’re either too shy, too embarrassed or too arrogant, so they expect others to just give it to them on a platter.

We’re afraid to ask for that sale, ask someone to do something, ask someone out on a date, because we don’t want to hear “No.”

The fear of the simple word “No” can be devastating for many, it looms large as it destroys low self-esteems.

Rejection is an unbelievable low feeling, which separates us from what we want and what we deserve in life. So once we experience rejection, at times, we likely won’t ever ask again.

We’ve all felt this unpleasant sensitivity at one time or another. Asking someone something, anything, and getting a flat out rejection, is devastatingly painful.

The Real Fear Of Rejection

So why is it getting rejected is so powerful. Why does it take such a stranglehold on our livelihood. Why is it so difficult to overcome this feeling once we hear those two simple letters, “No.”

Rejection, similar to anything else that’s negative, sinks its violent teeth into our backbone, and halts any progress we want to make.

There could be 150 people wishing you a “Happy Birthday” on Facebook, or telling you how great you look.

But if there’s just one person that tells you otherwise, someone that says “There’s too many candles and not enough cake,” instead of wishing you a happy birthday, you sulk.

Someone trolls “Your premature wrinkles on your face makes you look like crap, and you’re only 40.” Suddenly, those 150 positive messages doesn’t mean a thing.

On every level, what everyone wants is to just fit in, to be accepted by their peer group, to be part of the tribe. The reason why we fixate on rejection, is because of that feeling of alienation from that group.

Think back to the last time you did something out of your comfort zone. You felt hesitant, going through scenarios of rejection in your mind, thinking of the worse possible outcome.

So you hesitated as you spun into anxiety, while trying to build up the courage.

To be successful in life and business, you need to build up the strength to ask. Don’t be afraid to ask for things most wouldn’t dare ask for, and then expect a blatant “No.” Build up your immunity this way.

Build up the courage to work hard to get what you want, become passionate about it, and then all the no’s won’t matter.

Once you hear a success story, that your competitor is the top salesman of your company, what they don’t tell you is how hard they worked to get there.

How many “no’s” they’ve encountered, how many times they were rejected to get just that one sale. All you think is how lucky that person is.

Knocking on doors, making all those phone calls, asking for the sale, knowing how to close, is beyond being afraid.

It’s expecting, accepting and embracing rejection, expecting no, because they know they’re one step closer to a yes.

The biggest fear they’ve overcome, is rejection. To beat this fear is to believe in yourself, to never take it personally because it never is.

Just believe in yourself and what you’re asking for. If you don’t believe, then you’ll never overcome your fear.

Everyone Wants To Succeed

Everyone wants to get better, to make more money, go on that date, but most are scared to put in the hard work for it to happen. Most will automatically get discouraged on the first no.

It sets off a trigger, a spiral downwards, they begin thinking their plan or idea won’t work, because of receiving negative criticism.

What you need is to cement the belief this and any rejection won’t and shouldn’t dissuade you.

All You Need Is To Ask

There is one caveat however when you ask for something, and that’s to “ask” with conviction. To place all your confidence, creativity, and effort into it, to make it believable.

When it comes to selling something online for instance, your product or service most likely already has competition.

Someone most likely already asked them to buy, so that should give you the validation to ask as well.

The only difference being you should find more creative unique ways of asking. Package it so you’ll stand out distinct from the crowd.

Whenever it comes to relationships, what’s key is confidence without being cocky. No one wants to be associated with, or date someone who’s got zero confidence.

Similar to asking, the more confidence you have, the more you practice, the better results you’ll get. No one suddenly becomes confident overnight.

You need to work at it while not giving up the first time you’re rejected.

What we all have are dreams. In order for these dreams to come true, what it takes is a lot of dedication, determination, effort, and self-discipline.

It All Comes Down To Effort

Effort is the key to success. Anyone who’s successful has put in an incredible amount of effort to generate their results. The more you ask, alter it to get it right, the better you’ll get at it.

The better you get at asking for something, the more you refine it, the more “Yes’s” you’ll get.

It’s human nature however once you hear “no,” you feel rejected, as the foundation of this world is based on negativity.

So if you really want to get what you want, you should never give up the first time there’s adversity.

Once you feel hesitant or dejected, always remember you’ll never get what you want if you don’t ask for it.

As the song goes… “You can’t always get what you want, but if you try sometime…”

The Human Immune System And Its Fight Against Illness