How We Forget Our Dreams Once The Reality Of Life Interferes 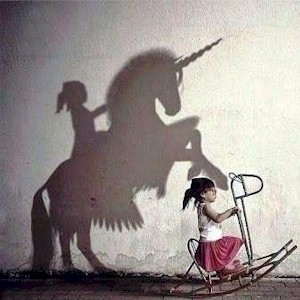 A child is given the dare to dream. You can be anything that you want Johnny, yes anything. Every single child is fortified with unique ambition and infinite fantasy. Where most end up however, is at the crossroads of doing what they’re told, and hope fading away.

There comes that decisive point in most lives, situations which directs their future. Some will find the courage to strive forward and pursue to achieve the goals they’ve set, while others, the majority, will slip back and wish away, as their dreams dissolve.

What the majority will do is conform, the natural inclination for most is to fit into their expected roles, and then comply without complaint to the dull standards imposed by the establishment.

Dreams Aren’t Real
Most will dismiss their childhood dreams, that fantasy to become great, making them faded memories. Then they live their lives shackled in a locked box.

The most discouraging, is when someone can no longer recall or pinpoint the exact specific reason why they let their dreams go.

This because life interferes, the occurrence of aging. When attempting to place the reasons why they’ve forgotten their ambitions, what surfaces are the same excuses.

I’m Not Good Enough
What peer pressure does is instills a lack of confidence, which discourages most not to follow through on their dreams. Then that persistent voice in the back of the head confirms it.

This is the same roadblock that everyone faces once contemplating to do something new or daring. Choosing to not listen to this voice, becomes the key in moving forward to fulfilling your ultimate life.

There’s Not Enough Time
Being too busy is an easy excuse which has ulterior motives, this to cover completely different emotions, such as procrastination and apprehension.

Everyone is afraid of failure, so most will instead choose to remain occupied with their simple routine everyday tasks. If they’re busy, as the excuse goes, then there’s no need to feel guilty for neglecting their dreams, justifying to let them go.

We realize that if something is truly important to us, and if we’re determined enough to achieve them, then we’ll always find time to do it.

The plan might be to take some time off, or carve out an hour a day to do them. One thing for certain is that you can always find the time if you really need to.

No One Supports Me
If you’re constantly looking for others to acknowledge what you’re doing, you then need to evaluate who you’re attempting to satisfy. You should always be looking out for number one first, which is you.

The only person who matters is you, and your confidence is the only support group that you need. If no one else supports what you’re doing, then determine who these friends and peers are. They’re obviously the wrong ones.

You’re Not Ready
Not being ready, not having enough information, the timing isn’t right, is just a delaying tactic which is motivated by the fear of doubt.

So consider what your current life situation is. Analyze the specific reasons that’s preventing you from being ready.

If there’s no answers other than procrastination, then what you need is to push yourself through the obstacles, where you can see your dreams on the other side.

But I’m Trying My Best
Most will just let go of their dreams, this by creating soothing fables about themselves, this in a subconscious attempt to justify the reasons, such as why they’re so inactive in achieving their goals.

The anxiety buildup from attempting to do the unknown, keeps them from facing the truth. It takes a lot of courage to ultimately realize that it’s you that’s holding you back.

So once you decide to take ownership of all your own thoughts and emotions, you will be able to inject the energy and the motivation that’s needed to propel you to do your best.

I’ll Do It Tomorrow
That same tomorrow which never comes. This perhaps the most common and classic tactic to delay, this to place a hold on your dreams.

Then you remain as the same person month after month, year after year. You hope that you’ll somehow magically transform, that tomorrow is when you’ll finally start chasing all of your dreams.

Instead, start right now, create a path, begin the journey towards the first steps of your ambition, whatever dreams they may be. The next minute is the most important time of your life, so don’t waste it. Make this time count, tick-tock.

Not Smart Enough Not Skilled Enough
There are just a select few who are born with genius skill. The obvious proteges which are exposed at a young age, such as the talent of a child to play piano when 4 years old. They’re extremely rare.

For everyone else, what it takes is excessive hard work, dedication, sweat equity, and specialized training to become educated to bring them closer to their goals. Using the excuse that you don’t have the knowledge, is because you haven’t sought it out.

Not Being Persistent Enough
It’s rare if someone succeeds the first time they try something. That’s when the majority however will quit. Those who chase their dreams, will always pick themselves up and then try again, then again.

We as humans are incredibly resilient. There’s no reason to surrender your goals just because you weren’t successful on the first try. Continue to plug away at them, one notch at a time. Hard work and determination goes a long way.

There are always roadblocks which needs to be overcome. No one said life was easy, so leave all your procrastination’s behind you, and begin the journey towards making your dreams come true.

The Struggle Of The Creative Being Treated As A Dangerous Mind

A Mindful Solution To Solving Problems While Clearing The Mind