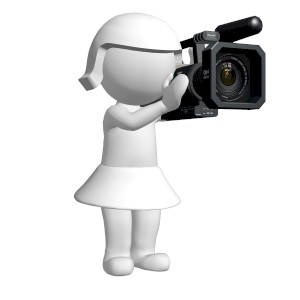 Video Production budgets for larger corporations and the enterprise sector are growing exponentially. With some of the larger companies allocating a budget of up to half-million dollars dedicated just for video production, extremely high end quality as well as proprietary methods for Internet broadcasting is expected.

As a result, shooting a series of corporate videos, whether describing the company or featuring their products, just posting them on YouTube and then looking for a return isn’t a very good sustainable strategy any longer.

[ad#co-1]
There are now better options for these companies with money to spend which can produce better results and returns. YouTube however remains an excellent option for smaller ventures with lower or non existing budgets, or for those who really want to hit the mainstream in the hopes that their video will go viral.

Companies as well as marketers should continue to use YouTube for posting their videos, but they should also define what the promotional purpose of what they’re doing is.

Video marketing should also involve using the various social media outlets for attraction as well, such as Facebook and Twitter for the same reasons. They should also know the excess baggage that’s attached to these types of services, such as similar videos or their videos being downloaded and copied directly from their competitors and then displaying them as their own, complete with watermark.

There’s also the potential problem where your viewers can be easily lured away from your site and then redirected onto YouTube, where they can become distracted and decide to view other videos, most likely similar ones to yours. This can present a significant problem, distraction and a loss in income or visitors, especially if it’s a well known brand.

Youtube Excellent For Smaller Budget Videos
For businesses, merchants or marketers with limited video budgets and resources, YouTube can be an excellent and invaluable solution for most. But when it comes to the enterprise level, YouTube should be viewed as an alternate piece of a larger video strategy since their budgets and options can reach further.

For companies who can deliver videos directly on their own sites, as well as developing their own in-house video production department, they’re also able to use the proper tools to do the job. So listed are a few excellent video production and broadcasting solutions which are currently available which caters to larger budgets.

Brightcove Video Solution
Brightcove for a while has been established as a white label vendor for video-distribution, tailored primarily for larger companies. They have also made some significant transformations since their initial launch.

The biggest and latest buzz regarding Brightcove surrounds their recently released App Cloud. What this is capable of doing is it creates as well as distributes mobile Web applications which are compatible on multiple mobile platforms.

What may be more important is that Brightcove offers an alternate video distribution platform designed strictly for enterprise usage. Brightcove actually ranks second to YouTube when it comes to total viewed video streams on the Internet with an average of around 700 million views per month.

Brightcove is one of the larger vendors when it comes to business video offerings as well. This ranges from customized contracts for large corporations to offering various smaller monthly packages for start-up companies and smaller websites.

The most affordable rates begin at around $100 per month for 50 video productions, which also includes 40 gigabytes of bandwidth per one user account. Professional enterprise and corporate packages can run into the thousands of dollars for an annual contract.

Sorenson Video Media
The most recent offering from Quanstrom is Squeeze 8 video encoding, which has already achieved more than 72% percent penetration among the top Fortune 100 corporations.

The Squeeze 8, the Squeeze Server, the Sorenson 360 video platform, the 360 OVP and the cloud applications help enterprises as well as corporations to simplify the production process of online videos by providing them with publishing, encoding, approval and review services, along with archiving and storage tools as well.

What they effectively do is accommodate delivery for any online screen which includes mobiles, tablet PCs and Web TV. Each of the products that they deliver are also able to configure to a host of different formats such as Blu-Ray, DVD’s, videogame consoles and iTunes. They are also able to syndicate to Facebook, YouTube, and Twitter.

The cost for the Sorenson 360 platform is around $1,000 per month for the enterprise level option, which is complete with 500 gigabytes of storage, 2 Terabytes of bandwidth, unlimited video durations, unlimited number of users and unlimited encoding bitrates.

Some of the less expensive packages offered by Sorenson includes the small business package, which is at $99 per month. The Pro package is offered at $159 per month, and the Plus package for $499 per month.

Vidyard Video Services
A new major player in the professional video sector is Vidyard, which was launched in August 2011. They also recently received $1.65 million in funding, which is designated to grow its video distribution platform designed for larger corporations.

The service that they offer is similar to YouTube, but it eliminates the need for its viewers to go to a 3rd party portal to watch the corporate videos. Larger companies who are using YouTube as an outlet to embed their videos are potentially exposing themselves to all the viewers on YouTube, much like a rabbit hole, this according to Vidyard.

What this results in is advertisements as well as other related distracting content, potentially from competitors, which are being promoted directly on the Youtube videos or channels.

Once a video is embedded on a corporate website, it’s Vidyard’s video player as well as the company’s dedicated video content that’s served, directly from Vidyard’s servers. There are also no ads which are shown on the videos and they don’t promote outbound links.

Vidyard is also able to syndicate with Twitter and Facebook. What may be their strongest feature however is a suite of sophisticated analytics which can drill down to a specific video or video channel, and show their individual performances.

Vidyard is attempting to distance their platform from the other enterprise grade video providers with its pricing strategy, which begins with an affordable $34 per month, rising up to around $250 per month for 100 videos. What’s included in their most affordable package are 5 users, 10 video player skins, and 100 gb of bandwidth per month.

The closest comparable to Vidyard may be the relatively new professional solution which is offered by Vimeo. Vimeo also provides an affordable business video-distribution platform as well.

Vimeo however lacks Vidyard’s analytics as well as some of the other valuable tracking features. There’s currently no other platform solution on the market which tracks and focuses the conversion and engagement rates of video through enterprise level intelligence. Vidyard also pairs the data with high quality content as well as curation.