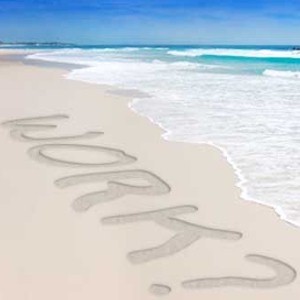 For sheer survival sake, what the majority of people will do on a daily basis is exchange their time for money. The pay which they receive becomes dependent on how many hours and how efficient of a job that they put into their assigned work.

Then at the end of the work week or month, is usually when they’ll get paid and will then spend it however they like. This paycheck is a reflection of the direct sweat equity which they put in.

But know that this process of monetary exchange, for those who are wealthy, or are on the road to becoming wealthy, is far from what they do. What they’ll do instead is get their money to work for them instead of they working for the money.

The Various Forms Of Working For A Living
One’s paycheck is contingent upon they showing up for work on time, and then performing the prescribed duty of their job. If a day of work is missed, then there’s usually no pay earned.

Another common form of pay is a monthly salary. This is similar to getting paid hourly except the pay rate is set regardless of how many hours that are put in during the week or month.

So overtime pay usually isn’t available, but may be received in a form of a bonus at the end of the year. Most who are in management related positions work on a salary basis. They will also routinely work more than the usual 40 hours per week under this arrangement.

This working for a living is the common mindset which we’re conditioned to do to earn a living, and is instilled in our mindsets as when we’re growing up, this is what we witness our parents doing to make a living.

We’re told to do well in school, excel, get post secondary education to get a better job and make a good living. High achievement and education is often preferred in order to get a better career which pays more.

Once we accomplish this, then the pressure is shifted to working as hard as we can, this so we can advance up the corporate ladder to higher ranks within the company, which also increases in pay.

Then finally, we’re let off this treadmill, allowing us to retire after calling it a productive career with great accomplishment, and then we drift off into the sunset.

Why This Dream Is Vanishing
Unfortunately, in this micro economy that we now live in, this concept that our parents visioned is no longer realistic. Although the educational system still remains the same, and we still prepare to get a well paying job, but the hopes of lifetime employment within the same organization no longer exists.

The majority of people will now typically work for a number of companies during their working lives. There are now massive layoffs, downsizing, and outsourcing which are all too well documented.

The once ironclad “loyalty” from the employee or the company is now practically nonexistent. As a result, workers now get their fingers caught in the spokes, and will experience financial hardship, this due to an unexpected and unsettled dysfunctional economy.

Trying To Get Ahead
So how does one get ahead then in this volatile economy. It’s becoming more difficult if not impossible to attain any form of financial security let alone abundance, this when one is attempting to trade time for money.

The math no longer works. There’s just not enough hours in the work week so that it can become profitable over the long term. Eventually, there’s a cap that’s placed on one’s earning potential, this due to time limitations.

Then couple in the fact of the constantly rising prices of consumables along with rising taxes, which takes a significant chunk of what’s earned, and then one begins to realize that it’s a no-win situation.

This Why You Need Passive Income
The key and solution to all this is the concept which is passive income. Basically, passive income is additional income that’s acquired without you needing to directly work at it hands on. This income isn’t exchanged for your time. If any time or work is required, it’s when you initially set it up and then the income begins to generate.

There are two known ways to earn this passive income. Income which is derived from a small business, and income that’s derived from investments. Business income is money which is generated from say an affiliate Website, which is set up once and then becomes hands free. It becomes self sufficient or is operated by someone else.

Income which is derived from investments is your money working for you, this instead of you working for the money. Depending on the exact type of investment, a rate of return becomes the passive income.

For instance, an example of this are dividends realized from blue chip stocks, interest derived from compound savings, or appreciation in real estate investments.

The Benefits Of Passive Income
The best advantage of these sources of income is that the money is generated regardless of one’s efforts. If you don’t bother putting in any further time, this passive income will still usually generate money.

You’ll still be earning around the same amount while creating additional passive income, or while sitting at the beach if you want. Also, this hands free income motivates you to increase your overall effort further.

If your money is working diligently away while you place your focus on something else, you’re in effect getting paid twice for your time. Then it’s realized how it’s possible to create wealth under this type of scenario.

So it’s recommended that you focus your attention towards developing and then activating multiple streams of passive income. What doing so does is it holds the key to your financial freedom.