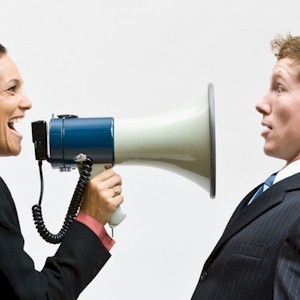 There’s always someone who enjoys the drama, they would rather stand out and be controversial to make their point, to be noticed, this to compliment their ego, or just because they need to state their rant. Regardless, they go against the grain and will speak out loud.

Although they are noticed, and they make their point effectively, what they also enjoy is the confrontation, the dramatization that they create, this even though others would rather avoid the theater. At times, conversations of this nature however, are unavoidable.

The next time that you find yourself in some form of contentious conversation, or need to defend yourself, what you need are tailored rebuttals to make your point, to get your statement across effectively, to become a better communicator.

Once you’re confronted, this could be with a co-worker, friend, or a relative, keep in mind that there are firm stances that you can take, so at the very least you’ll get your point across so they’ll understand.

Always Have A Vision
This is an effective method that the superior athletes use, and that’s to visualize the final outcome on what they’re wanting to accomplish. The key becomes to visualize what your desired outcome of the conversation is, this before you begin.

At times, it’s even helpful to share what your vision or intent is with the other person, this at the beginning of the conversation, so that they’ll know what you want or have is an end game.

Use “I” Or “My” Statements
One of the surefire ways to get someone on the defensive, this during any conversation is to look in their direction, or worse, point your finger and say “You never” or “You always” or “You should know better” along with other statements of accusations.

Instead, to avoid being confrontational, try framing all of your statements beginning with “I” or “Me or My.” What this allows is the other person to know that all you’re doing is stating your opinion or perspective. So always begin your sentences with “This is when I” or “This is how I feel” or “My concern is.”

Always Ask Questions
To find out what the perspective of the other person is, start by asking insightful questions which are non-confrontational. Or if you don’t understand what their motive or intent is, what they’re point is behind their statement, then ask for clarification.

At times, what’s effective is to restate what they said, this to make sure that you’ve interpreted it correctly. After they’re finished speaking, you can follow up by saying “So what you said was.”

Listen Actively And Intently
Just because it appears that your mind is absorbing what’s being said, it doesn’t mean that you’re listening or understanding what they’re saying. Almost everyone is guilty of this, and needs to hone up their listening skills.

Begin by staying alert and present, make eye contact if appropriate, and never interrupt unless necessary. Keep listening while not getting distracted by planning your response, or finding fault in what they’re saying while they’re still talking, as you’ll lose focus.

Your Tone Of Voice
Whenever you hear someone say “Oh, I’m so sorry,” but it’s not convincing, you know that they clearly don’t mean it. Even though what’s spoken is an apology, their tone of voice comes across as being defiant or unapologetic.

The reason being that the actual words that you speak accounts for just 10% percent of how others will interpret what you’ve just said, while your tone of voice accounts for around 40% percent.

So make your responses convincing, as how you use your tone is approximately 4x times more effective than what you say. Make sure that you come across as genuine, firm, or relaxed, this along with what you speak.

Control Your Body Language
The other 50% percent of communication is your body language. When it comes to the human species, the spoken language is still relatively new in our evolution, while nonverbal communication and body language has existed since the beginning of mankind.

Our brains are still wired to pick up the slightest nuances, this in nonverbal body signaling. So it becomes vitally important to read and understand the other person’s body language, while fine tuning your own nonverbal communication. Understand the language that’s being spoken outside of what’s being said.

Focusing On Their Behavior
If you happen to be delivering criticism, then know the difference between criticizing their behavior and criticizing them as a person. Know the subtle difference when saying “You’re really negative,” to “Whenever you point out the flaws of others, it really discourages me.”

Once you criticize someone directly, what you’re doing is instantly putting them on the defensive, where if you point out their behavior, it gives them the opportunity to change their opinion or perspective.

Use Specific Examples
Never be too vague or generalize. Instead of saying “You’re always late,” say “You’ve shown up 10 minutes late on the last two meetings.” Once you provide specific examples or details, what you’re doing is taking the subjectivity out of the equation.

Always End Positively
At the end of any conversation, especially if they’re difficult in nature, it’s always important to turn the energy back into something that’s positive.

For instance, some positive endings can include expressing your gratitude towards the other person, showing genuine excitement, or complimenting them somehow on a recent success. What this does is it leaves their frame of mind in a positive state once they respond.