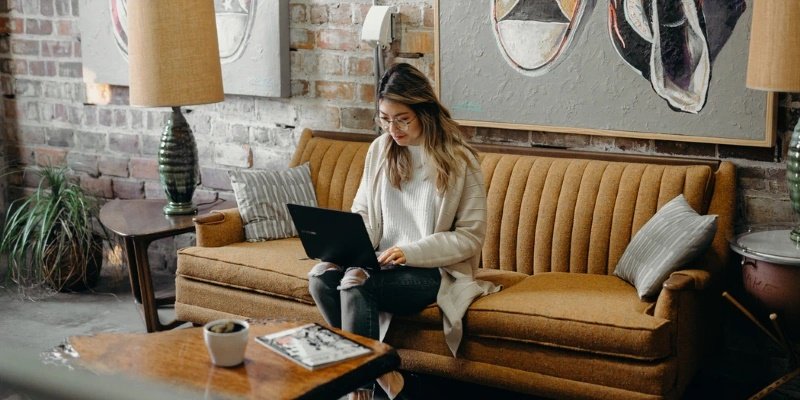 Imagine your new work day, as the scent of cranberry muffins flood your kitchen, while sipping a cup of freshly ground coffee as you turn on your laptop. Gone are the days of traffic jams, while people are hurriedly going in all directions, pushing and shoving on the subway, battling their way to work.

You’re glad you made the shift to work from home, where the workforce is trending anyways, especially in the new world we now live in.

This since everything “business” is now downsizing and can be performed online, with routes such as ecommerce, affiliate marketing, lead generation, etc.

There’s no longer a need to rush to your cubicle at the office downtown, as the “rat race” is becoming a distant memory.

What you’re avoiding is the biggest stress of any working day, which is the mad process of getting to and from work.

This involves battling traffic, pushing and shoving at the coffee line, as there’s a frantic race to make it to work on time.

Working from home has become the new norm, a soluble option as duel household incomes are now becoming a necessity, as daycare and other associated costs are skyrocketing.

So thanks to technology, where a small handheld electronic device is now capable of performing any business related task securely online and worldwide, as the economic landscape is shifting.

But Working From Home Is Hard

Many are quick to claim however, that working from home needs a special brand of entrepreneurial individual, as it’s difficult to remain motivated and focused working on your own alone.

You can easily become distracted, as there are competing demands such as the baby crying, or attempting to beat boredom and loneliness. Procrastination becomes a key deterrent.

Because of this “pandemic” however, keeping your job or entering the workforce to find a job is becoming more difficult than ever.

This includes texting on smartphones at rapid speed, using Skype or Zoom for conference calls, marketing on Instagram, are all now second nature.

So if you’re a latte toting hipster, just been laid off or recently retired, there’s now a completely new income opportunity which is working from home, this to replace the traditional 9-to-5.

No Need To Commute

The most obvious is the battle of fighting traffic to get to work on time, as there’s road rage warfare in most large cities, all frantically attempting to get to work by 8AM. The traffic becomes aggressive and angry.

The mental as well as emotional fatigue of this daily grind makes you exhausted by noon, resulting in less production at work.

So not needing to leave home to earn money, while fighting hours of stress and frustration are instantly avoided when working from home.

What becoming frantic causes is making poor decisions, while developing poor eating habits by needing to munch on a desk drawer full of convenient processed sugary snacks, when at the downtown office.

What a hectic work environment in the morning does, is throws out any intent of eating healthy. Anything that’s available is devoured, this to satisfy the hunger pangs once they hit before noon.

But when working from home in a controlled calm environment, it becomes possible to plan a healthy eating regiment in advance.

What’s possible is arranging the day to hit the gym in the morning, this to break up the lull before lunch.

You can jump start and refresh the brain, by going outdoors and going for a jog in the sun at 2PM. The time and energy that’s saved from not battling traffic, can be use for yoga, meditation, or lifting weights.

Working in an office environment where there are constant demands and deadlines, the furthest from your mind is getting physical exercise. At the end of the work day, you feel physically famished.

What’s known however, is that it’s biologically impossible to feel physical fatigue, when sitting behind a desk all day. Many will mistake mental fatigue as being physically tired.

What the body is screaming for is physical movement, which releases mental tension.

This is completely possible when working from home, as there’s more mindful awareness that’s placed on physically moving around.

You can set up mini-breaks during the day such as cleaning the house, or taking the dog out for a walk, etc.

What’s known is that being confined to a cubicle at the office, competing with work colleagues while needing to multi-task, becomes tiring and distracting, resulting in less work productivity.

The overall impact of being in a better mood by working from home, does is results in the mind being more calm, which promotes more work getting done.

Being more relaxed, allows for clearer thinking and creatively, while eating the right foods, which promotes focusing better on the immediate task at hand.

Often, many think they’re being productive, but are actually just spinning their wheels, as there’s nothing being accomplished which is noticeable or outstanding.

What’s obvious is that the economy is shifting, where the “boss”’ can ask you in their office, and suddenly produce that dreaded pink slip, as you’ve been replaced or laid off.

The Ever Shrinking Job Market

The new focus now is on efficiency, and it’s we the human workforce who are the casualties, as we are being removed or replaced by technology. What’s emphasized is time management, multitasking, more production, resulting in the workers eventually burning out.

So there are increasingly more individuals, who are now making the switch to working from home, escaping the corporate rat race.

They’re finding a safe haven working from home, which also allows them to find the time to put fresh dinner on the table nightly, get in shape or lose weight by exercising, while finding sane piece of mind.

There are also many who are agreeing to “flex” schedules, and deciding to work from home. Others are choosing to take the leap of faith, and deciding to use their skill sets to become entrepreneurs.

This new economy is on a mission to downsize, which is leaving the giant office towers downtown vacant.

This economic shift in the workforce is now noticeable and picking up steam. The cliché is becoming true, it’s better to work smarter and not harder.

How The Exact Words You Speak Dictates Your Life